Tribal Killer whale / Orca tattoo design is available for instant download. The patterns used in the design is inspired from the Ainu people, the native / indigenous people of the lands surrounding the Sea of Okhotsk, including Hokkaido Island, Northeast Honshu Island, Japan.  Killer whales are one of their divine beings in their mythology.

Killer Whale, The God Of The Sea in Ainu Mythology

The Ainu have historically been animists; they think that everything in nature has a kamuy (spirit or god) inside its body. The most significant ones are Repun Kamuy, god of the sea, fishing, and marine life, Kim-un-kamuy, god of bears and mountains, and Kamuy-huci, goddess of the hearth. In the Ainu religion, Kotan-kar-kamuy is revered as the world’s creator.

For the Ainu people, killer whale are the Repun Kamuy, the god of the sea/offshore in Ainu mythology.

Because the sea offers opportunities for harvests that could not be found on land, such as fishing, whale hunting, and maritime trading voyages, Repun Kamuy is a significant figure in Ainu mythology. His generosity and carefree demeanor are demonstrated in one of his myths.

In the tale, he harpoons a whale and her young and dumps them close to a settlement of people. A sea wren calls on him when he gets home and informs him that humans are dismembering whales with axes and sickles, disrespecting both the animal and Repun Kamuy as the gift-giver. Instead of getting furious, he chuckles and says that the humans own the flesh and can do anything they want with it.

A little while later, he leaves again and chances to pass the same hamlet, when he discovers that the sea wren was lying: the people are wearing ritual robes and properly butchering whale flesh with sacred swords. Repun Kamuy is moved by this act of piety and assures the humans that the sea’s bounty will prevent them from becoming famine.

Ainu Patterns and their meanings

The pattern is said to have the meaning of “repelling evil spirits,” The basic patterns include more-unoka (vortex shape, meaning “quietly curved“), aiushinoka (spiny shape), and shikunoka (eye shape) The pattern used in the design is inspired by their traditional Ainu patterns.

You will be directed to the download page after purchase. Just click the link and download the pdf file. Then forward it to your favourite tattoo artist. The file also contains black and white version for your convenience. Also the pdf file is illustrator friendly so you can change colours and size to your liking. 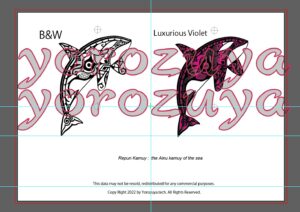 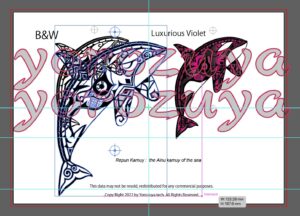 Just simply tick your preferred colour and hit the ‘purchase’ button.
*The file is illustrator editable so you can change the colour however you like.

5 Elements Of Nature In Japanese Kanji Symbols For Tattoo